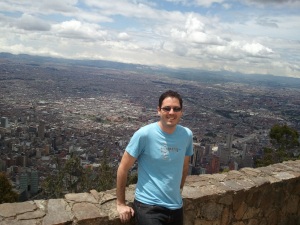 I landed in Bogota, the capital of Colombia located in South America after a long series of flights across North America.  After a weekend on the West Coast in Seattle, I intended to use my flight-pass to get myself in one trip to Colombia, which necessitated returning to Boston.  Therefore I ended up flying from Seattle to Long Beach, California, then an overnight flight back to Boston, then to New York, Orlando and finally Bogota, arriving at around 10PM.  Overall, I think I was travelling for almost a day and a half, it was a long and tiring journey to say the least!  After landing and taking a taxi through the streets of Bogota, the city reminded me of many other large sprawling foreign cities I’d been to in recent the years, whether in India, China or South Africa.  The obvious difference here of course was the use of Spanish on signs and buildings.

Unfortunately my plan to learn Spanish over the Summer had been unsuccessful, so I wasn’t having any luck deciphering the signs flying past me or conversing with the taxi driver.  I did have my first experience understanding Spanish though after not too long when a bizzare man came up and started dancing in front of the cab, dressed as a robot, with his own music.  “Locco, Locco!” the taxi driver I said, I laughed and agreed, “yeah, that guy’s crazy alright.”  Fortunately, my lack of Spanish skills weren’t going to impede me too much as I had to arrange for some couch-surfing prior to arriving and to start off I was hosted by the wonderful Cami who was a local who grew up in the area.

She showed me around Bogota the next day, taking me into the center of the city and introducing me to the local equivalent of Starbucks called Juan Valdez.  Since Colombia is known for its coffee, I had to try some and observed that although Juan Valdez is a well known coffee-chain, the lay-out and feel of the stores is almost exactly the same as Starbucks.  I ordered my coffee (with Cami’s help) at about 10 o’clock in the morning and was surprised when they asked if I would like brandy or whiskey in it!  As tempting as it was, I declined. 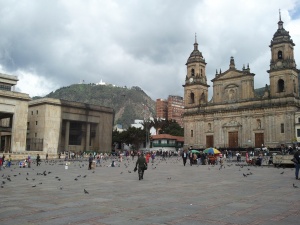 Bogota is a massive sprawling city, full of traffic, bordered on the East by a luscious green mountain range.  There’s plenty of history, different areas to explore and a decent bus system which can be used to get around, though  its train system was destroyed in riots many decades before.  I had a stroll around a local shopping mall and then wandered through the center of the city, with Cami showing me her University and the main sights including churches, the residence of the President and various other historic and Government buildings.  I took an entertaining guided tour run out of the tourist information office and then paid a visit to the must-see Museo del Oro, the Gold Museum.  Apparently housing one of the largest collections in the world, the museum had loads of pre-Hispanic gold artifacts with gold shaped into just about everything including jewelry, armour, weapons, kitchen utensils and art-work.

I then learnt that the timing of my visit happened to coincide with elections across all of Colombia which were being held over the weekend.  Much to my shock however, because of the elections I discovered that the country would dry the whole weekend, in other words no alcohol could be bought or served!  This is apparently to avoid the practice of politicians heading out to bars and shouting drinks to people in order to persuade them to vote their way.  To ensure this I didn’t miss out, I went out on Thursday night where I sampled some Colombia brews at a Bogota Beer Company bar as well as some aguardiente, a local anise-flavoured liqueur.  There was definitely a party vibe in the area, a huge and rowdy crowd in sports jerseys were parading down the street, their local team had apparently just won the national soccer comp.  I enjoyed the spectacle, until an enthusiastic supporter jumped out from behind me and threw a handful of flour in my face, resulting in me coughing for the next minute or so before I recovered.

So I’d witnessed a bit of the night-life in Bogota and seen the historic sights, I had to decide where to go next.  I had my Lonely Planet, plenty of suggestions and it was obvious I could go in just about any direction and find something great to check out.  Colombia was a massive country.  After researching, I soon found a destination which offered exactly what I was after, warmer weather, beaches and scuba-diving.  I made my way to the bus terminal, bungled once again with no Spanish through buying a ticket and after a wait of several hours, boarded an overnight bus to my destination – Santa Marta, located almost a whole day’s ride away on the North Coast.