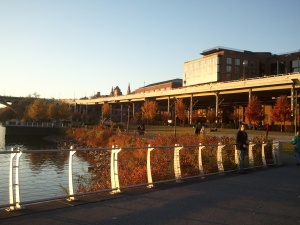 My Jetblue flight pass was running out and it was time to head back to Washington D.C. again. I’d only managed to connect with one of my cousins, Steve, last time I was there and this time the plan was to catch-up with Richard as well. Like Steve, Rich had met me before, about 20 years ago in Europe, therefore I didn’t recall much of the encounter.  What would you like to do on your visit, he asked before I arrived, watch some football, drink some beer, do some sight-seeing? I was still worn out from my week in Colombia, therefore my response was, a few drinks and a quiet one watching a bit of American football sounds great!

As it turns out, my 2nd cousins actually live in Maryland, just north of D.C., but this
wasn’t a problem as the train took me straight to their suburb. I arrived in the
middle of autumn and the landscape was simply stunning, red and yellow foliage draped the entire area like nothing I’d ever seen first-hand before. Awaiting me was some great hospitality by the Levines, BBQ, beers and more BBQ filled my weekend as I enjoyed their hospitality.  Over dinner a few potential activities were suggested for the rest of the weekend, one of which involved going to the local gun-range nearby. Shooting some guns, hells yes I said! I had yet to fire a weapon up until that point in my life and figured that sooner or later the opportunity would present itself to do so somewhere in the U.S.A.  Therefore Rich and I headed down with his two shot-guns to shoot some clay pigeons. 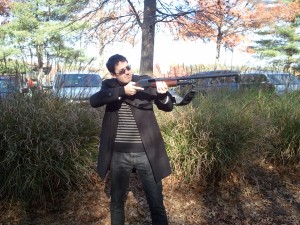 Frankly, I was surprised that I was allowed onto a gun range with a loaded weapon, wouldn’t I need some sort of gun license? Apparentely not, at no point was my I.D. even checked, we simply talked to a couple guys at the desk, bought a card, then headed down to the out-door arena with our guns and ammo. I must admit, shooting a shot-gun in real- life was fun, I’m sure I’ve killed scored of zombies with such a weapon in video games, but actually learning how to use and operate one in real-life was pretty cool. That being the case, my ability to actually hit the flying targets was pretty dismal, I averaged hitting about 1 in 10, therefore if the zombie apocalypse does come upon us one day, you probably don’t want to be hanging out with me for survivial.

Apart from shooting, I was left with more than enough time to continue exploring Washington D.C. and I hit up as many of the free Smithsonian museums as I could while I was there. The Air & Space Museum took up most of my time as I took in the large exhibition covering the Apollo missions, followed by the Natural History Museum, a quick view of the Constitution in the National Archives and a couple other random other art / history museums that I found to wander into. Despite having a full day, still others beckon for my next visit, the Spy Museum, the Newsuem, the Library of Congress and of course the White House.  Regardless though, at the end of the day, I was thoroughly exhausted, but knew I had finally done Washington D.C. justice.